With noisy data or multiple different measurements of \(y\) at a given value of \(x\), we may not be able to fit a function/curve that goes through all points exactly. Therefore, in linear regresssion the aim is to find a function that best approximates the data but does not necessarily go through all the points.

Plotting the independent variable \(x\) on the x-axis and dependent variable \(y\) on the y-axis, linear regression gives us a straight line with equation: \[y=b_0+b_1x,\] where \(b_0\) is the intercept and \(b_1\) is the slope of the line. The \(x\) and \(y\) variables remain the same as the data points cannot change, however, the intercept (\(b_0\)) and slope (\(b_1\)) can be modified to obtain the most optimal value for the intercept and the slope. The linear regression algorithm fits multiple lines on the data points and returns the line that results in the smallest error. This may be achieved by minimising the sum of the squares of the differences to the data, known as a least squares approximation.

Figure 1: Plot of scatter points in 2D space (blue) and line that results in the least error (red).

This can be extended to multiple linear regression where there are more than two variables. In this scenario, the dependent variable is dependent upon several independent variables \(x= (x_1, …, x_n)\) where \(n\) is the number of variables. You can assume a linear relationship between \(x\) and \(y\) with the regression equation: \[y=b_0+b_1x_1+b_2x_2+b_3x_3+…b_nx_n +\epsilon,\] where \(b_0,b_1,…,b_n\) are the regression coefficients and \(\epsilon\) is the random error.

There are many methods to evaluate the performance of the linear regression algorithm. Two commonly used methods are the root-mean-square error (RMSE) and the coefficient of determination (\(R^2\) score).

The coefficient of determinaion is a statistical measure of how close the data are to the linear regression line.

\(SS_r\) is the sum of squared regression and represents the variation explained by the linear regression model.

\(SS_t\) is the sum of squared yotal and represents the total variation in the data.

Based on the above equation the \(R^2\) score usually ranges from 0 to 1, but can be negative if the model is completely wrong.

Least squares fitting minimises the sum of the squares of the differences between the data provided and the polynomial approximation. In other words it minimises the folowing expression: 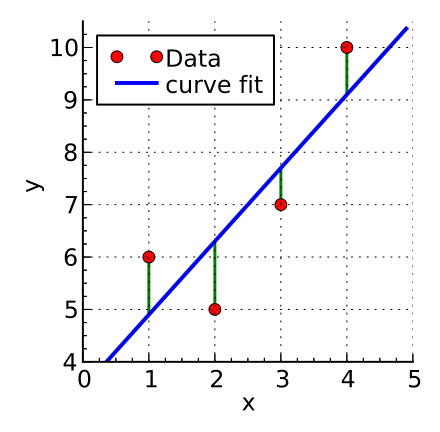 Figure 2: A plot of the data points (red), the least squares line of best fit (blue), and the residuals (green).

In this calulation we are computing the sum of the squares of the distances indicated in green in Figure 1.

Implementation of linear regression in Python#

In this example we are attempting to fit a linear best fit line to the data length_width.dat in log-log space. This file contains the lengths and widths of submarine landslides in the North Atlantic basin from Fig. 7 in Huhnerbach & Masson (2004).

The coefficient of determination is also determined by default from the linear regression calculation. To check these values agree we will also calculate the \(R^2\) value using the numpy.polyfit data.

Open a file and store data in arrays:

Curve fitting is popular to use for datasets containing noise. To fit these curves of varying polynomial degree we can again use the least squares error calculation.

Using numpy.polyfit we can fit curves of varying polynomial degree to the data points. This is demonstrated below.

Using the above function that evaluates the squared error, we can evaluate the error for each of the polynomials calculated above.

As can be seen above the error drops as we approximate the data with higher degree polynomials.