In this notebook, wave properties will be discussed, as well as derivations for simple harmonic motion and the wave equation.

A summary of the wave properties can be seen in the figure below:

A variation and comparison between a selection of wave properties can be seen below:

A wave carries information and energy but does not transport the material. It undergoes simple harmonic motion.

The solution to this equation can be approximated from analysis, knowing that a sin or cosine function when differentiated twice returns to it’s original form, with a factor in front. So, we can estimate the solution to be

As we know that

which shows that this solution is valid.

Thus, the solution to the wave equation is:

Here, \(A\) is the magnitude of the initial displacement, \(\omega\) is the angular frequency and \(t\) is time.

Note a few things in the plot above:

To derive the wave equation, a string with density \(\rho\) per unit length is stretched in the \(x\) direction with tension force \(T\). A wave can be described as coupled simple harmonic motion. This can be thought of as a rope with lots of masses being displaced individually. 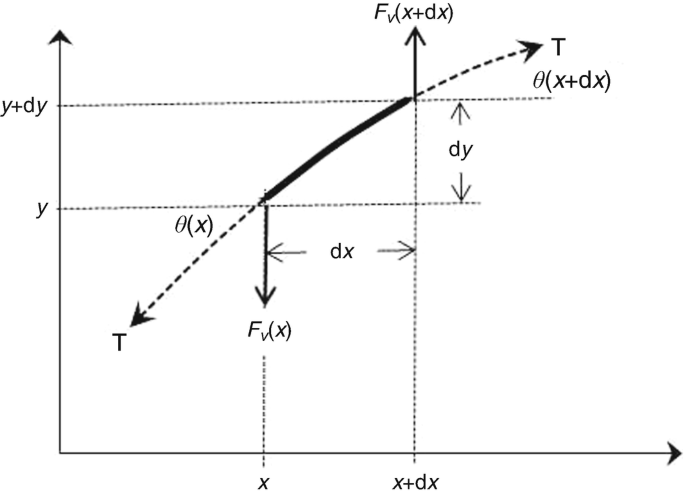 The vertical forces on the string must balance.

Consider Newton’s second law for the force, where \(F=ma\)

This is equal to the difference between the vertical tension T at the two ends, so

Assuming deflection is small, \(T\) can be assumed to be constant.

One solution to the wave equation is by using travelling waves of the form \(u(x,t) = f(x \pm ct)\).

To plot the wave equation, a few initial conditions have to be set. consider